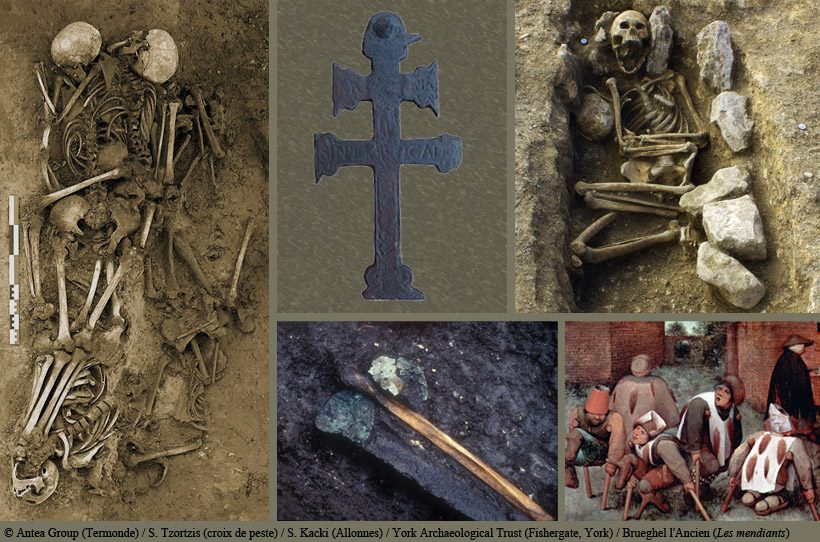 From Wednesday 23 May to Friday 25 May 2018
Bordeaux, Athénée municipal

Visible or imperceptible, acute or chronic, disabled or slightly impaired, illnesses have continuously affected past populations. Over the course of centuries and millennia, human groups have developed varied solutions–medical, religious or juridical–when faced with such occurrences. The ill were treated in a highly variable manner according to time and place, being socially included or excluded, cared for or neglected, invested with magical powers or viewed with ignominy. But how is this reflected in the place of burial, or the care of the corpse in past societies? By placing those who suffered from various afflictions from prehistory to the contemporary world at the centre of the debate, this is the subject addressed in the 10th annual meeting of the Anthropology and Funerary Archaeology Group (Gaaf).

To understand the treatment of the ill in the past from burial treatments and the spatial organisation of cemeteries comprises a real challenge for archaeological research. Indeed, until relatively recently, the individuals themselves and their remains have not been the focus of much attention in works dealing with the place of the ill within society. Up to the end of the 19th century, sufferers were only studied as part of historical treatments of charity written by researchers from the perspective of traditional Christian models. During the greater part of the 20th century, their status was principally viewed from the perspective of the history of European care institutions. It was not until the end of the century that the ill finally became true subjects of study as a result of developments in the social sciences. Since, the expansion of rescue archaeology and the development of human bioarchaeology have resulted in many more finds of individuals affected by illnesses, those who are today at the centre of scientific investigations, in the same way as care institutions and medical instruments from the past are. Drawing on the advances in this research area, the meeting will provide the occasion to formulate an outline of the evidence for the care of the ill but also to re-open discussion on the treatment of the bodies of the unwell from the perspective of funerary archaeology.

Through this international and multi-disciplinary call for papers, the conference organisers wish to provide a forum for exchange between researchers coming from diverse disciplinary backgrounds–by encouraging the participation of archaeologists and anthropologists working on varied geographical and chronological scales, as well as researchers from other social sciences and humanities disciplines, for example historians, sociologists, and ethnologists. If palaeopathological diagnosis is of great importance for addressing the relationship between human remains and the evidence for illness, this meeting will not solely have the goal of drawing together presentations principally directed at skeletal manifestations of illness. These may be addressed through particularly illustrative cases, but the social and funerary aspects will be given preference and placed at centre-stage in presentations. Oral presentations of synthetic treatments addressing the care and funerary treatment of the ill at site, regional, or national scales will be especially welcomed.

Scientific discussion have been organised around four general themes. The first three treated the place of burial of sufferers of ill health, the funerary treatment accorded to their remains and the symbolic, prophylactic or magico-religious activities surrounding their burials. The fourth and last theme addressed the contribution of archaeology to the understanding of past medical and surgical practices, as revealed through studies of human remains.

Theme 1 – Accommodation: the places catering for the burial of the ill

Theme 2 – Burial: treatment of the cadaver

Theme 4 – To care for, to repair, and to dissect: human remains, testaments to ante- and post-mortem medical and surgical practices

The publication will be available in 2021.

Receive Gaaf news in your mailbox.