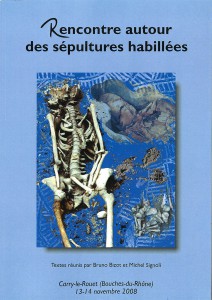 This Rencontre, held at Carry-le-Rouet (Bouches-du-Rhône) the 13 and 14 November 2008, inaugurated a new cycle of meetings proposed by the Groupe d’anthropologie et d’archéologie funéraire (Gaaf). The association, which was created in October 2007 for researchers interested in funerary and anthropological themes – archaeologists, historians, anthropologists, sociologists, doctors, etc. – is an extension of the initiative, in 1991, of a group of archaeologists from the Paris region: the Gaafif (Groupe d’anthropologie et d’archéologie funéraire en Île-de-France).

This first regional association offered a space of discussions and reflexions around a pragmatic goal: allowing everyone to expose his work and freely express his methodological and scientific problems. The rapid success of the Gaafif proved the importance attached to these organized exchanges in a common respect. From meetings to information dissemination in the form of a Bulletin, the members of the association quickly understood the limits of a regional reflection and came up with the idea of round tables. Thus, were born the Rencontres: Rencontre autour du linceul, held and published in 1996, Rencontre autour du cercueil, in 1997 (published in 1998), Rencontre autour du feu organized in 1999 (unpublished).

After the dispersion of its members out of the region of Paris, the Gaafif disappeared for a while until some of them in the South of France wished to reactivate the association. Bringing their project of a meeting around dressed burials, Bruno Bizot and Michel Signoli launched the creation of the Gaaf. The researchers’ response to their call was immediate. After two years, the new association works now with a dynamic program including one or two workshops of expertise in paleopathology around Paris, and one Rencontre per year. The strength of the Gaaf comes from the wish to keep an active and multidisciplinary network. Its success comes from the diversity of the origin of its members (Inrap, universities, ministry of culture, CNRS, museum…) mostly French but also Swiss and Italian. We hope that this first publication of the Gaaf will perpetuate and prolong the constructive exchanges of our association.

NB : This publication is out of stock. You can download it for free.