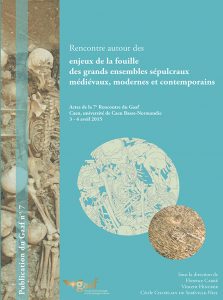 The excavation of large, stratified burial grounds (community or parochial cemeteries) are commonly feared of because technical and financial constraints. However, such cemeteries appear as the most relevant sites to investigate the evolution of the relationship between the living and the dead, thus between the living and death, during the medieval and postmedieval periods.

For a long time, these sites have been identified as study territories favouring a real interdisciplinary approach, dealing in their interactivity the funerary space and the area used by the living, in a synchronic and diachronic way, and multiplying scales of analysis within the site and between different sites. During the past 20 years, the generalisation of the so-called “field anthropology” methods of study and the substantial progress in biological anthropology came to deeply revolutionize the way in which these ensembles are excavated and analysed. While the enrichment in terms of knowledge is undeniable, it has nonetheless resulted in a significant increase in study time and cost, raising questions as to the capacity to process the mass field data and to interpret observed phenomena on historical and social levels.

This symposium offered to deliver a critical and reasoned assessment on how to approach these large cemeteries, by trying to identify collectively perspectives for the future, both in terms of research and practice. The communications brought some reflections from experiences over the last 20 years in the fields of excavation, study and publication, affecting both urban and rural sites, as part of a rescue archaeology and excavation programmes.

The emphasis was on the relationship between the scientific purposes, the methods and the means implemented. The topics covered were numerous, ranging from the way of conducting a survey in a programmed plan, to the publication, through the definition of conditions and means needed to conduct the excavations, the modalities of its realization to the study of portable and non-portable archaeological remains. We talked about the difficulties met but also about the solutions chosen to face them. The different areas where the contribution or the limits of these operations are situated were questioned.

A collective conclusion was made through a half-day roundtable with the speakers and participants. The goal was to start a synthesis on the scientific issues and the practical perspectives of the excavation of these large medieval and postmedieval sepulchral ensembles.

The book can be purchased at the Librairie Archéologique (“Buy online”) or at the association (with an online purchase). Members who are up to date with their membership can get a discount ordering through the association.